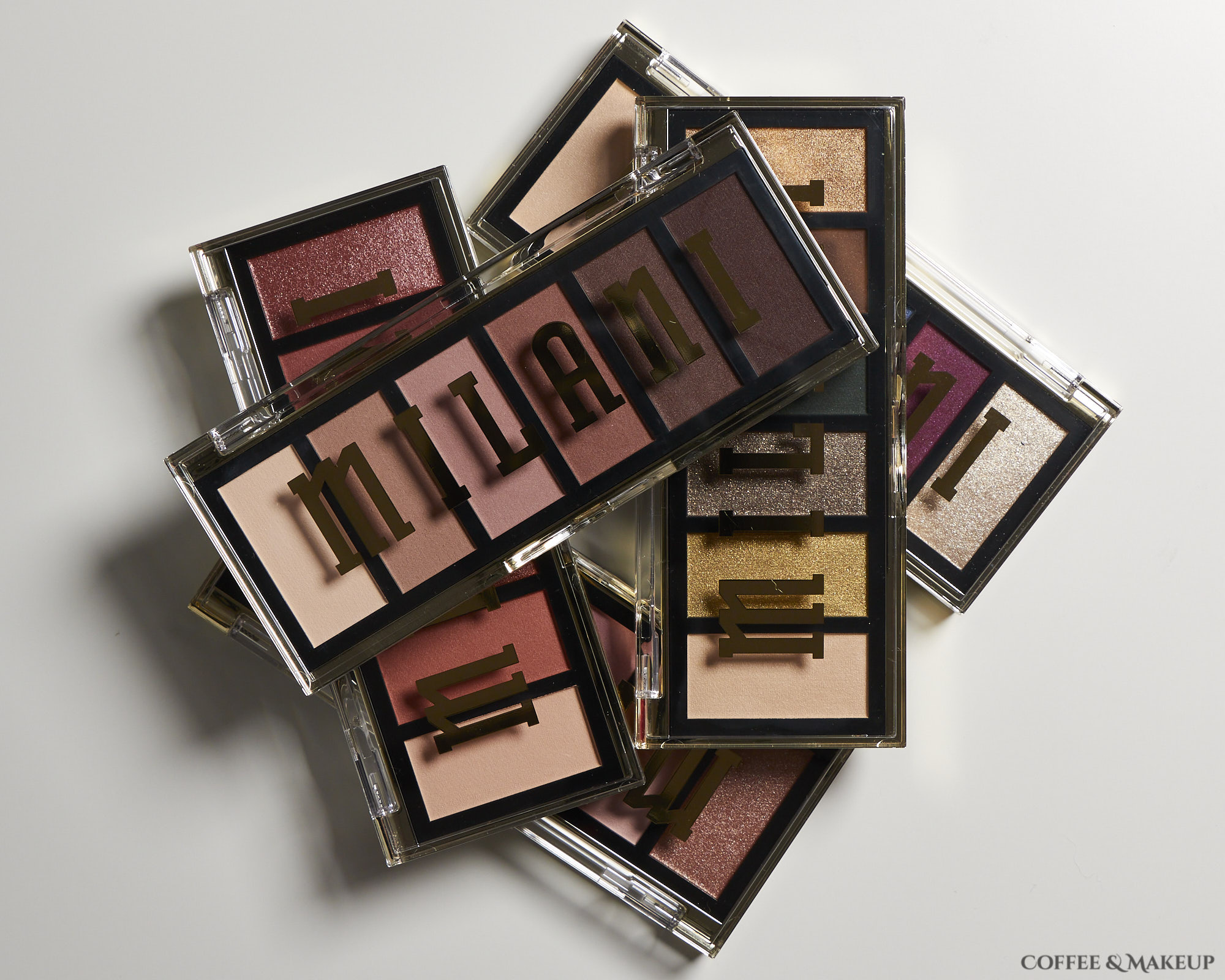 Disclaimer: This post contains affiliate links, which means I make a small commission when you make purchases through them.

There are 5 palettes in this line, each containing 6 shades and retailing for $9.99. Each palette contains a total of 5 grams / 0.18 oz of product. Milani describes them as having a “velvety smooth, hyper-pigmented” formula that is “ultra-bendable & buildable.”

In general, the mattes had a soft, silky texture that felt finely milled and they were very easy to blend. They adhered better to an unset or sticky base and could be prone to dusting away easily. They applied best when I used a packing-type of brush rather than a fluffy brush. The best one I currently have for this purpose is the Sonia Kashuk Essential Small Eyeshadow Brush. Using a fluffy brush could cause them to blend away too easily.

I wouldn’t say these are “hyper-pigmented.” They are somewhat sheer and can be built up to be semi-opaque. Some shades are more pigmented than others. The least pigmented palette was Partner in Crime, which was just sheer across the board.

Wear time was shorter, averaging at about 5 hours over Nars Pro Prime Smudgeproof Eyeshadow Base. Keep in mind I have oily eyelids, so your mileage may vary.

All of the shades in this palette are matte. There is a very tiny amount of pearl mixed into the shadows which helps them to not look completely flat-matte. On the eye, they read as matte, though.

This palette is aptly named, as I would use it as a companion palette. You could also use it on it’s own for looks that are typically considered office-appropriate. However, it’s nice to have a selection of matte shades in a variety of depths to use in conjunction with other palettes that may not have basic shades like these.

Something to note is that the shades in all of these palettes are very blendable and you really don’t need transition shades except if you wanted to add color variation to your look. I would probably pair this palette with formulas from other brands that I find more challenging to blend. For example the Makeup Geek Eyeshadows I recently reviewed would be the type of formula that these would pair well with. Very blendable shadows like these can be super helpful when you are using a highly pigmented but harder to blend formula.

This is not the palette I would turn to if I was looking for a deep smoky look. While there are darker shades, they dust away quite easily once you start blending. They also don’t have enough adherence to be able to build them up a whole lot.

I would say this palette could be ideal for somebody that likes quick, no-makeup makeup. It will give the eyes some definition with minimal effort.

Shade 1 has a nearly matte finish but it’s not completely flat. There is a very subtle sheen to it. I wouldn’t even say it’s a satin finish. It almost reminds me of the finish of Hourglass Veil Translucent Setting Powder. Extremely subtle hint of luminosity. Semi-sheer but plenty of color payoff to show up. This shade isn’t super light, it’s very close to my skin tone. It evens out the color of my eyelids more than it highlights on my complexion.

Shade 2 is gorgeous. It has a smooth formula with a soft satiny olive base and lots of shimmer particles that are large enough to stand out against the base color without being so large that I’d call them “glitter”. Applied on the lid, this has plenty of shine and brightness. The color is semi-sheer but builds up easily. Very little fallout during application.

I would describe Shade 3 as a dirty olive. This has a different texture than the other shimmers in this line. The base is a matte taupe and it has larger gold shimmer particles that stand out nicely against the matte base. When I initially swatched this, I didn’t like it. The base color didn’t seem pigmented enough and I thought the larger sparkles would cause fallout during application. In practice, this is actually quite nice. The color is semi-sheer but applies to the lid evenly and has plenty of color payoff. Sparkle fallout was surprisingly not too bad! The sparkles adhere easily to the lid as long as I don’t set my base. They can be somewhat easy to dust away if apply another color on top to deepen up the outer corner. To combat this, I just applied a bit more of this shade over top the deeper shade to replace some of the lost sparkles.

Shade 4 is also surprisingly good. I thought, based on the performance of the deeper shades in the Rosy Revenge Palette, that this would be similarly disappointing. But, it’s not. It has very nice color payoff, little-if-any fallout, and it blends easily. A very nicely formulated deep green.

Shade 5 was not quite as nice as Shade 4 but was better than the deep purples in the Rosy Revenge palette. It had good color payoff but applied a bit patchy and required a little extra finesse to get it blended out and applied evenly to the lid.

Shades 2 and 5 are too similar as are Shades 3 and 6. There is a subtle difference in undertone but overall the tone and depth are very same-same. Once on the eye, these two sets of shades are barely distinguishable from one another.

The three shimmers adhered easily to the lid, even over the matte eyeshadows. They had a good amount of shine but I wouldn’t describe them as being foiled. There was mild fallout from them but not enough that I’d do my foundation after my eyes when using these shades.

I thought this palette was about on par quality-wise with the Outlaw Olive palette and a bit better than the Partner in Crime palette. Very usable, very decent shadows. The color story was a bit lackluster for me personally, though.

Shade 1 is probably the best shade in this palette. It has a smooth texture without any chunky glitter and leaves a soft shimmery finish on the lids (not highly foiled). I didn’t experience any fallout with this shade and found it semi-sheer but easy to build up. It had good adherence, even over other eyeshadows.

Shades 2, 3, and 4 are all okay. They are a looser, more powdery formula. They are very easy to blend and have semi-sheer but buildable color payoff. They are easy to work with, especially if you prefer a less intense look. The deepest pink had noticeable fallout during application. For this shade, tap excess off your brush before applying to the eyes.

Shades 5 and 6 are my least favorite in the palette. They are very dusty, powdery, and not the most pigmented. I recommend not setting your base, using a stiffer brush with them to ensure the best color payoff and then going in with a small fluffy brush to blend around the edges. Both of them had fallout. Definitely be careful to tap excess from your brush before applying these shades! Avoid applying them over other eyeshadows as they won’t adhere well to other powders.

I really like the color selection but the overall quality wasn’t as good as the Outlaw Olive or Burning Desire palettes.

Shades 4 and 5 have a thinner, dustier texture that doesn’t adhere super well to the lid. They aren’t very buildable. Once you get an initial layer down on the lid, the lid becomes too dry to hold onto any more shadow. This can cause them to look like they’ve been applied unevenly. Blending them out can dust them away too easily so I have to go back and forth between my packing and blending brushes more than I would like to.

The shimmers all worked fine, about as well as the other shimmers in this line. The depth of shade 3 against my pale skin made the shadow look more sheer than the lighter shades. I don’t think it’s necessarily more sheer, just that it’s more obvious because it’s a darker shade on me. I had to build it up a bit extra when I used it in a look to get it to pop more.

I was pretty disappointed with this palette because of shades 4 and 5. They are beautiful colors but I would not use them because of how poorly they applied.