I skipped February so I’m including it together with March. February was not all that exciting except for one week we had an ice storm. That would’ve been the main thing in the post. The last two months didn’t seem to fly by as quickly as January did.

I went to Forest Park twice and explored two areas. First was a portion of the Wildwood Trail (by the Witch’s Castle) and a portion of the Holman trail. When I got there, there was a sign saying how the trail was one-way (because of Covid), though I saw people walking both ways and couldn’t tell which was the direction I was supposed to be walking in. The parking lot was a decent size and at 10am on a weekday there were still plenty of parking spaces left. It very quickly leads downhill to a smallish river/creek. To me this was the most unique part. I kept walking past the Witch’s Castle (forking to the left) and went uphill again along the Holman trail until I reached NW 53rd.

Second was the Ridge Trail. Not exactly sure where it goes on Google Maps. Alltrails shows it. I guess there is parking at the top but I didn’t go that way. I parked at the bottom near St. Johns Bridge. If you haven’t been here before, the parking lot is pretty tiny, right off the road, and you have to walk on the very edge of the road for about 10 mins toward the bridge to actually get to the trail. Right away, you can see the view of the bridge and across the city. From there it’s mostly a steady uphill walk. Decent cardio if you keep a good pace. There were just a few spots with exposed tree roots early on that require careful stepping.

I also checked out the Iron Mountain Trail in Lake Oswego. This turned out to be a lot shorter than I expected. For some reason, I thought it would be longer and the incline would be steeper. It’s an easy walk on a well-maintained path. I parked in a small, somewhat hidden, lot by some horse stables. You get into the lot off a neighborhood street and drive on a narrow dirt/gravel road to get to it. There is only enough space for 4-5 cars. You can also park in the neighborhood and walk in if you can’t find a spot in the parking lot… it’s not very far.

I walked on the main path without forking off onto any of the other branches at first and made it all the way to the end near the Oswego Lake Country Club. The trail just ends onto a neighborhood street. At that point I turned around and, about halfway back, I took a right turn just past a bench and went uphill. I enjoyed that part of the trail more. You can get a bit of a view of the hills the higher you go up and at the top there are some signs with info about the mining history in Lake Oswego, a seating area, and a lookout.

The weather has been warming up so I wanted to find a place to walk where I could get some more sun. I had always driven past Luscher Farm City Park and the Stafford Rosemont Trail and decided to finally actually get out of the car to see this area closer up. I parked at Hazelia Field Dog Park and took the trail past the roundabout for just a short time until I reached a small loop. At this point, I ended up wandering into an open, grassy area. It wasn’t super clear to me if you could do this but I saw a few other people doing it so I went for it. I love me some forest trails but this is a nice change of scenery if you are looking for peace, quiet, space, openness, light. It’s a good place to clear your head.

These are all things I found on Pinterest. When I say I tried these recipes, what I mean is that I used them as inspiration. I’m not somebody that typically follows recipes exactly. So don’t take this as me saying these are great as they are. 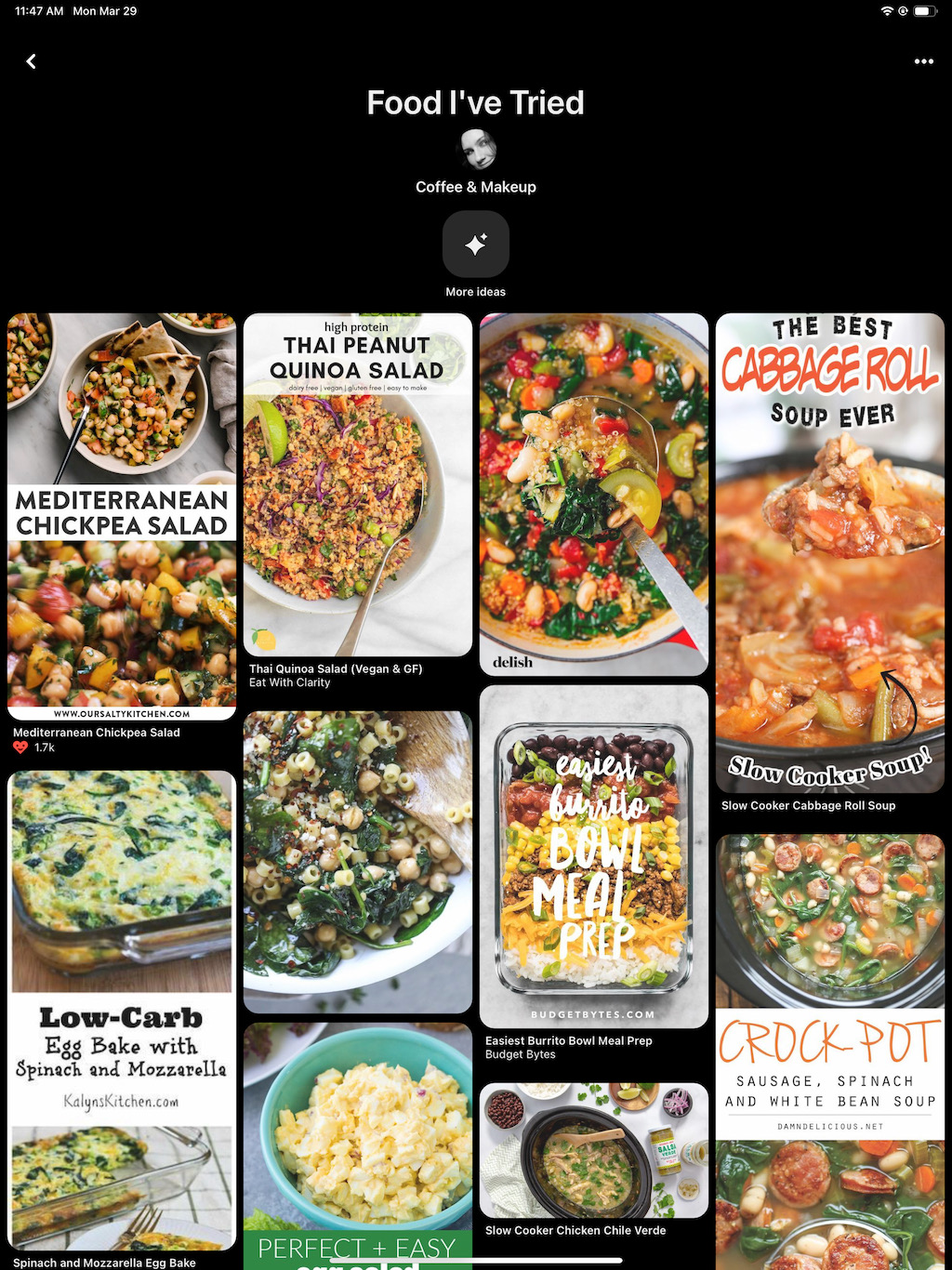 Mediterranean Chickpea Salad – I made this with beans instead of chickpeas because I have several cans I need to use up and I didn’t really follow the recipe quantities. I just used it for the ingredients list to get the general flavors from it. It came out good and held up well for maybe 3 days. I still kept eating it after 5 days but the texture and flavors started to go downhill by then.

Thai Quinoa Salad – I followed the recipe for this one pretty closely. Glad I did. Good balance for the amount of each ingredient. Nice texture. Flavors were interesting.

Cabbage Roll Soup – This was pretty good but I think I should have cooked the beef up in a pan and seasoned it first instead of throwing it straight into the slow cooker the way I did.

Quinoa Vegetable Soup – I liked this but would use half the quinoa next time. It soaked up too much of the broth.

Slow Cooker Thai Basil Chicken Curry – This didn’t come out the best but I think it was my fault for leaving out too many of the ingredients. Would try it again.

Egg Salad – This took me a lot longer to make than I would have liked and it was missing something. I think it’s a good place to start and then you can add in whatever else you want.

Pasta with Chickpeas – Would use less pasta, more chickpeas and double the spinach next time.

Chicken Burrito Bowls – I did not follow this recipe at all but this is the one that inspired me to try doing this in the first place. I used chicken thighs seasoned with your standard garlic/onion/salt/pepper and threw it together with some leftover rice, black beans, chopped tomatoes, red onion and cilantro. Would absolutely make something like this again.

There really isn’t much going on in my life so the only interesting thing that happened in the past two months was having an ice storm roll in, staying in a hotel near work for a week, and coming home to no power for another week.

I was just starting my second week at my job when a winter storm settled over my area. At first, I thought we were only going to get some snow so I didn’t worry too much about it. I figured I’d deal with the sketchy roads and hopefully it wouldn’t be that bad. But the morning it started snowing, what was mostly falling was freezing rain. Being new, I didn’t have the hours accumulated to be able to miss work without some sort of penalty. I could do it, but I’d pay for it. My options were miss work and take the attendance hit or figure out a way to make it in.

My dad ended up driving me and the plan was for him to pick me up later that day. During that time, I guess he was seeing on the weather forecast that conditions were only going to get more dangerous through the week so he basically gave me an ultimatum: stay in a hotel nearby for the week or just don’t go to work. For a second, neither seemed like an option. I reluctantly agreed to the hotel idea and it turned out to be kind of a blessing because my parents lost power within a day or two of that.

I needed a few things, like boots and a rain jacket, and my parents brought them to me later that day. Without them, I don’t know how I would have managed the hour total of walking to and from work each day, especially when the ice started to melt into some pretty deep slush. That week my expenses nearly cancelled out my income, I wore the same clothes all week long, ate out of the lunch room (luckily they have decent food options and free coffee).

This was all fine, actually. It was when I got back home that it got harder.

Before I got home, I was aware that my dog had been sick with diarrhea while I was away. Losing power meant no hot water unless we heated some up in a kettle while the generator was running. So, she could not be bathed, the floor could not be properly washed, laundry could not get done. But it was cold so I let this stinky/dirty dog sleep in my bed like this. Fun times.

We didn’t get power back for around 6-7 days. The worst part of this wasn’t so much the inconvenience, it was that it was yet another obstacle in the way of getting my life on track. What I mean by this is getting to a point where I am making enough money to support myself financially without having to live with my parents and actually enjoying what I’m doing to make that money.

After moving in with my parents about 6 weeks before that, pretty much everything in my life was different than what I was used to and I had only just started to rebuild some sort of routine. Being in the dark for that time and losing my routine set my mental health back. I was already struggling with internal obstacles. That I would not be able to improve. That I am just incapable of creating good content. The external obstacles compounded the lack of hope that I’d ever be able to make this blogging thing work.

That feeling started to lift a few weeks after we finally got power back. Currently, I’m feeling slightly better and am just kind of going through the motions while trying not to get stuck in a rut.